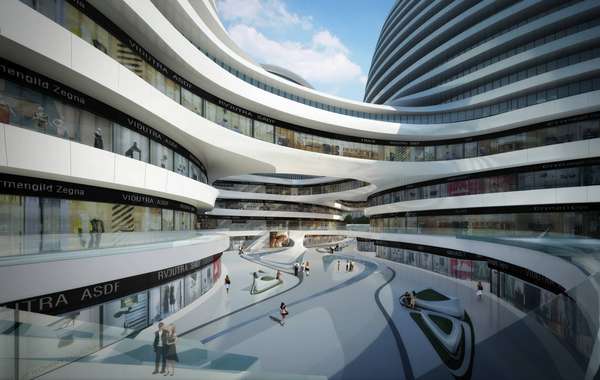 The Galaxy Soho by Zaha Hadid is a Surreal Beijing Structure

Meghan Young — October 30, 2012 — Art & Design
References: zaha-hadid & itsnicethat
Share on Facebook Share on Twitter Share on LinkedIn Share on Pinterest
Architect Zaha Hadid has done it again with the Galaxy Soho. A stunning sight to behold, it is the latest development for the architectural guru. Constructed in Beijing, China, the Galaxy Soho is a futuristic mall full of sweeping lines and sinuous curves, which happens to be Hadid's signature style. So surreal is the design that the images appear to be an artist's rendering. In reality, however, the Galaxy Soho has already been built and was photographed by Iwan Baan.

Comprised of four structures and 18 floors, the Galaxy Soho is connected via bridges. Inspired by nature, Hadid reveals, “The natural rhythms and flows of the city, of the environment and of the people have been integrated within the design to define its formal composition.”