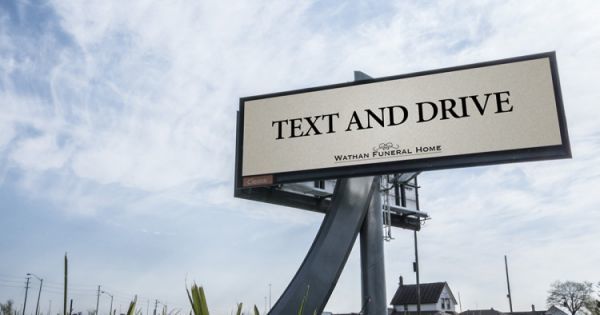 Meghan Young — May 13, 2016 — Autos
References: wathanfuneral & neatorama
People are constantly reminded not to text and drive, so seeing a billboard with the complete opposite on it would definitely turn heads. The Text and Drive ad campaign is associated with a funeral home, which makes its business on the dead. Although a morbid thought, it is one that makes complete sense. Thankfully, Wathan Funeral Home isn't actually real, or else it would probably be facing a lot of lawsuits.

Conceived and executed by John St. Advertising, an agency in Toronto, the Text and Drive ad campaign addresses the fact that people still do it even when told not to. Mylene Savoie, managing director of John St. Montreal, says, "So we wanted to think of a different way of saying it that would make people think about the real consequences. Which is where 'Text and drive' came from."
5.8
Score
Popularity
Activity
Freshness