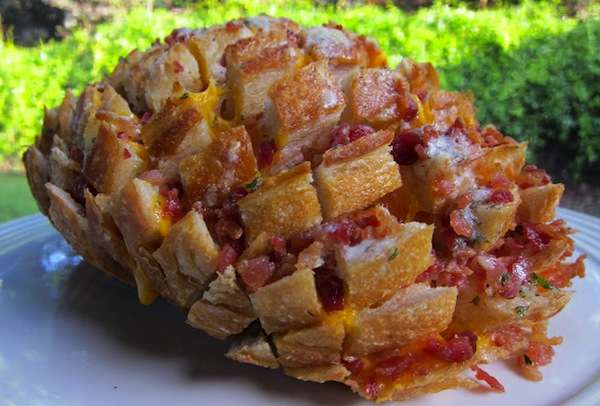 Plain Chicken's Food Pull is a Nacho and Sandwich Hybrid

Kyle Towers — April 10, 2013 — Lifestyle
References: plainchicken & foodbeast
You might be wondering to yourself what exactly this food pull thing is. It's hard to describe as it kind of resembles a giant pinecone. The feast is not quite nachos and yet, not quite sandwiches either -- it's almost a hybrid between the two.

Plain Chicken explains that the inspiration for the work of food art came from cinnamon bun pulls that some of the general public might be familiar with. Either way, the characterizing of the proper terminology can be discussed while it is pulled apart for delicious feasting.

The food pull is covered in ranch, bacon and cheese, but theoretically can be topped however you'd like. I have sweet visions of peanut butter, jelly and chocolate drizzle.
1.4
Score
Popularity
Activity
Freshness