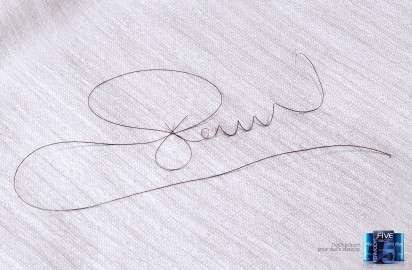 Meghan Young — October 8, 2012 — Marketing
References: saatchi & ibelieveinadv
Share on Facebook Share on Twitter Share on LinkedIn Share on Pinterest
The Fermo Five campaign ambiguously centers around people's signatures. Although its tag line reads, “Don’t inherit your dad’s identity," it doesn't revolve around adopting his signature. Instead, if one looks closely enough, he or she will notice that the signature has been written out using a strand of hair. Since the Fermo Five campaign is promoting a treatment to prevent hair loss for both men and women, this makes complete sense.

Conceived and executed by the Publicitas Saatchi & Saatchi ad agency branch based in Guayaquil, Ecuador, the Fermo Five campaign is both simple and clever. Although many sons and daughters fall in the footsteps of their father's hair loss, this ad campaign shows that doesn't have to be the case with the help of a particular product.
3.2
Score
Popularity
Activity
Freshness
Jeremy Gutsche Keynote Speaker