Nail Polish for Cats
Next
Set of
Related
Ideas 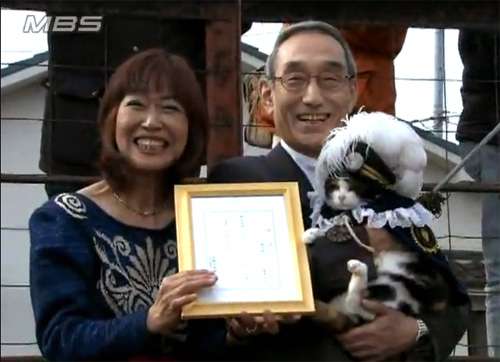 Katie Cordrey — January 20, 2010 — Lifestyle
References: pawnation & letsjapan.markmode
Share on Facebook Share on Twitter Share on LinkedIn Share on Pinterest
Tama-can is one cool cat as she claws her way up the Japanese corporate ladder with apparent ease. First spotted by Trend Hunter when she landed her stationmaster gig, Tama-chan has been promoted from Stationmaster to become the first cat in the world to hold an executive post in a railroad corporation,

Because Tama-can is credited for increasing railway traffic nearly sevenfold, the railroad company plans to rebuild Kishi Station into the shape of a cat’s face in the coming year, but Tama-can won’t be receiving any extra kibbles as a reward. It seems that since that, she’s becoming a bit of a fat cat as a result of all of her success.

See her promotion ceremony in the video above.
4.5
Score
Popularity
Activity
Freshness
Get Trend Hunter Dashboard

Japanese Rent-a-Friend
Temporary Cats, Dogs or Husbands to Cheer You Up