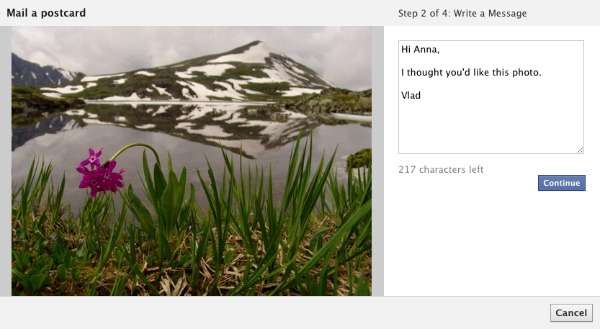 Katherine Vong — August 10, 2012 — Tech
References: sincerely & mashable
Now you can turn your social media photos into real-life Facebook postcards. The social media giant is currently testing out a postcards app that is powered by Sincerely, the same brand that powers Postagram, which turns Instagram photos into postcards.

Although the Facebook postcards app was conceived out of a 'hackathon,' it will now be available for users who want to send any of their Facebook pics to their friends. However, users can only send their own photos, not those that are publicly owned or are from Facebook pages. The postcards will look like normal postcards, with an image on one side and a spot for a personalized message on the other.

Right now, the Facebook postcards will only be available to select users; the social network is testing out different price points before the app is officially rolled out.
0.8
Score
Popularity
Activity
Freshness