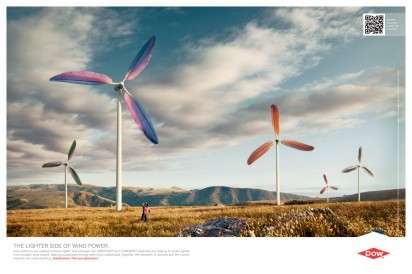 Meghan Young — March 30, 2012 — Eco
References: draftfcb & ibelieveinadv
Share on Facebook Share on Twitter Share on LinkedIn Share on Pinterest
The Dow Chemical Company campaign may seem surreal, but it deals with some very real products and services, which benefit people and societies greatly. The ad campaign shows the various outlets that use Dow solutions. For instance, they are applied to the production of 95% of the world's smart devices, effectively turning everyone into Einsteins. They also make turbines light like feathers.

Conceived and executed by Draftfcb, an ad agency based in Chicago, the Dow Chemical Company campaign shows that this organization betters people's lives both practically and imaginatively. By appealing to imaginations, the ad campaign provides a happy vision of the world that will put smiles on faces.

A fun series of print ads, the Dow Chemical Company campaign was art directed by Derek Julin with creative direction by Ron D’Innocenzo.