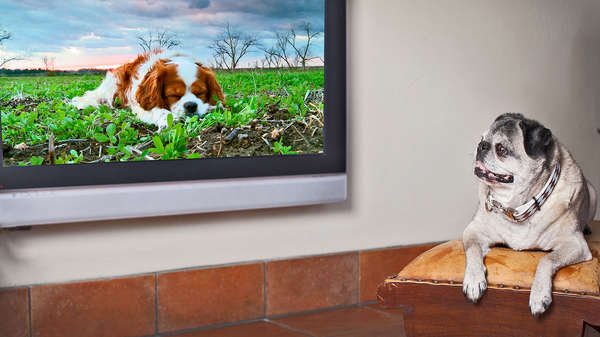 DogTV on DirecTV is the World's First Television Channel for Dogs

Alyson Wyers — August 3, 2013 — Lifestyle
References: dogtv & fastcocreate
Share on Facebook Share on Twitter Share on LinkedIn Share on Pinterest
DogTV is the world's first dog television channel. It will be available on DirecTV starting August 1, 2013. All programming is planned for dogs. That's right -- dogs watching television, not just shows featuring our furry friends. Although, there is some of that too.

Just like children who might sit in front of the television after school as they wait for their parents to return home from work, DogTV is intended for dogs hanging out at home. Founder and chief content officer Ron Levi says, "They've got nothing to do, and boredom causes destruction of the house and irritation and barking." However, the idea isn't to create canine couch potatoes. The objective is to entertain and relax them.

While there is some debate over whether or not all dogs watch TV, content will be divided into three main categories: exposure, relaxation and stimulation. Currently dog television programming is being shown in the United States and Israel, with plans to expand further east soon.
2.8
Score
Popularity
Activity
Freshness
Access Advisory Services

4,000 Free TV Channels
FreedomTV: From Dancing With The Stars to Sumo Dancing