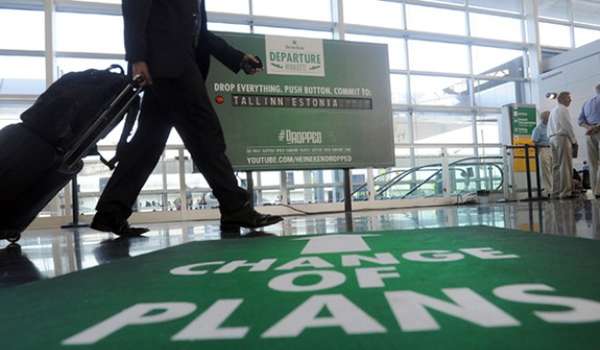 Alyson Wyers — July 16, 2013 — World
References: heineken & psfk
Inspired by Heineken's 'Voyage' campaign, the Departure Roulette experiment allows travelers to board an airplane to an unknown destination. By pushing a button on the terminal display, participants must be willing to forego their original travel plans and over the age of 25 to play. The experiment took place at Terminal 8 of JFK Airport. The combination of travel and drinking is a classic one, but this experiment allows consumers to engage with the brand in a much more interactive and emotional way.

The Departure Roulette concept is related to Heineken's 'Dropped' -- episodic adventures to be aired on Heineken's website beginning July 22. The online series will feature four men visiting various remote locations, who will film their experiences. People will also be able to watch via YouTube. To promote this venture the brewery released a commercial titled 'The Voyage,' in addition to a 'Dropped' trailer.
3.2
Score
Popularity
Activity
Freshness