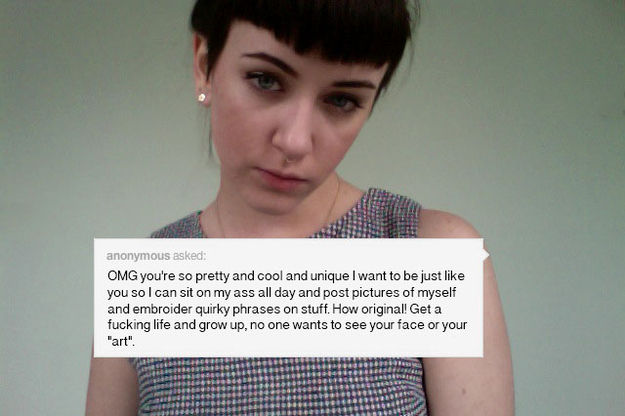 Laura McQuarrie — September 22, 2014 — Social Good
References: lindsaybottos.tumblr & buzzfeed
Share on Facebook Share on Twitter Share on LinkedIn Share on Pinterest
Unfortunately putting yourself out there on the Internet often leads to cyberbullying online, as 21-year-old student Lindsay Bottos of the Maryland Institute College Of Art has proved. Bottos runs a Tumblr blog that features some of her work as an artist, as well as selfies from time to time. Since the started her blog in 2010, the artist has received tons of hate messages, but rather than taking it to heart, she decided to start a new project that draws attention to the cruel messages that have been sent to her.

The 'Anonymous' project features the words that anonymous Tumble users have sent to her, including messages that take jabs at her personal appearance. In describing her project, Bottos remarks that "The messages I've received are definitely indicative of a greater problem of online bullying and the anonymity of the Internet."
5.7
Score
Popularity
Activity
Freshness
Jeremy Gutsche Keynote Speaker