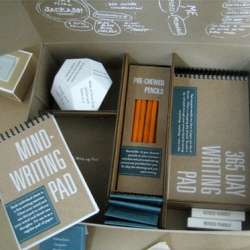 ‘The Kit to Thwart Writers Block' Stimulates Your Senses

Cecilia Biemann — March 3, 2009 — Unique
References: elizabethdilk
With orders to find something she hated, change it and make it better, and then advertise it, Elizabeth Dilk created the ‘The Kit to Thwart Writers Block.’

Because she hated suffering writer’s block herself, Dilk researched the many ways to solve it, and chaneled her discoveries into this packaged kit.

The kit was initially advertised by dispersing branded napkins at coffee shops and various other locations where creatives might go to try and avoid or overcome writer’s block.

The napkins featured the kit logo on one side, and the opposite side was silk-screened with depressing doodles on them which looked like they could have been drawn by someone in the throes of writers block.