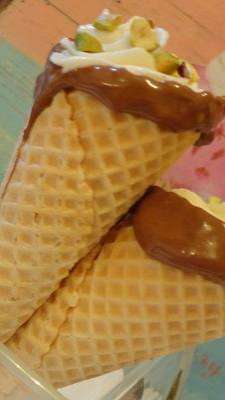 Carly Foy — June 26, 2011 — Lifestyle
References: theartofbeingperfect.blogspot
Buttercream Bakery has yet again come up with a creative way to take a spin on a traditional Italian dessert, the cannoli, with its 'Cone-oli' recipe.

The Cone-oli recipe is very similar to that of a traditional cannoli recipe, but instead of using a deep-fried shell, the recipe uses an ice cream sugar cone. The recipe is simple for this ricotta-filled treat. The Buttercream Bakery owner said of her Cone-oli recipe that "The cone-oli filling is unbelievably delicious, heavenly even, but there is a lot of filling in each cone. A LOT of filling, even from me, a cannoli filling fanatic."

The Cone-oli recipe is the perfect treat for a summer picnic with its unique substitution of the shell for an ice cream cone.
1.4
Score
Popularity
Activity
Freshness