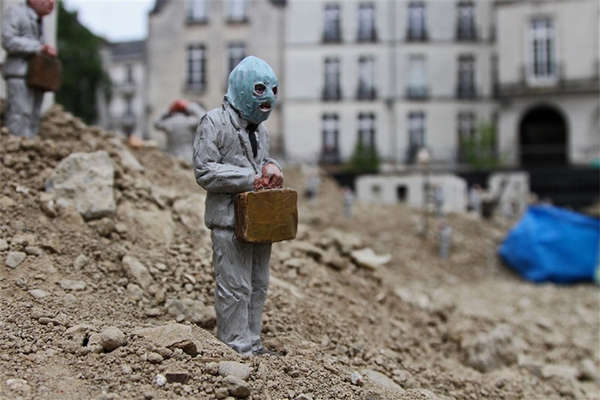 Isaac Cordal has Created a Diorama Citing the Collapse of Capitalism

Sarah St.Jules — August 25, 2013 — Art & Design
References: isaac.alg-a.org & thisiscolossal
The result of a collapse of capitalism has been perfectly represented in this series, and it is a horrifying sight when the system as we know it no longer exists.

Artist Isaac Cordal has done an incredible job of turning a miniature world into the scary aftermath of blindly following those who are in power. It's amazing the detail that he has been able to inject into his work.

This series is called 'Follow the Leaders,' and it takes inspiration from the title literally. The miniature people either have masks on their faces, or they all look the same. The fact that all the people are dressed and look the same elude to the fact that they were all caught up in the system, and are duplicates of each other.

This series is full of political commentary, and the concept could be a possibility if we blindly follow those in charge, and if the collapse of capitalism ever happens.
2.4
Score
Popularity
Activity
Freshness