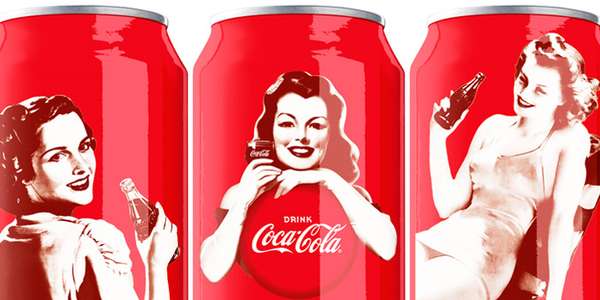 Summer Luu — April 23, 2011 — Marketing
References: wearebulletproof & thedieline
In celebration of Coca-Cola 125th Anniversary, the company has given the pop cans a makeover that brings back nostalgic memories from the past.

Bulletproof, a branding and packaging agency, worked with the NWEN brand team to create a rich identity behind the soda's iconic brand and its success from the past 125 Years. In using a timeless emotion to connect with the pop's consumers, the visual design team revisits the sexy era of when it all started. Inspired by the 1940's, the design involves iconic World War II pin-ups--more specifically the glamorous Varga Girls of the era.

Coca-Cola has always marketed the fizzy beverage as a drink for occasions and associated memories, and the Coca-Cola 125th Anniversary soda cans definitely reconnect consumers with wonderful moments from the past.
6.5
Score
Popularity
Activity
Freshness