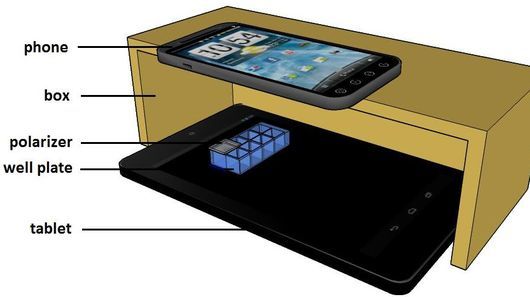 Rahul Kalvapalle — June 2, 2015 — Lifestyle
References: cnbp.org.au & gizmag
Share on Facebook Share on Twitter Share on LinkedIn Share on Pinterest
The Australian Centre for Nanoscale Biophotonics or CNBP's system for low-cost diagnosis is designed for use in developing countries and isolated parts of the world. This contraption consists of a smartphone, tablet and a compact kit that can be used to test blood and other body fluid samples for a wide variety of illnesses, including arthritis, pancreatitis and cystic fibrosis.

To use the device, clinicians simply deposit a dyed fluid sample into a well plate and place that plate on the screen of a tablet that's in a box. Polarizing glass is then placed over the plate compartment that holds the fluid. The smartphone is then placed on top of the box, so that it camera lines up with the specific compartment.

The great thing about the CNBP system is that it uses a very limited number of components, most of which are easily sourced. This makes it a great option for use in developing countries lacking the human and physical resources to carry out conventional diagnostic testing for large numbers of people.
2
Score
Popularity
Activity
Freshness
Jeremy Gutsche Keynote Speaker