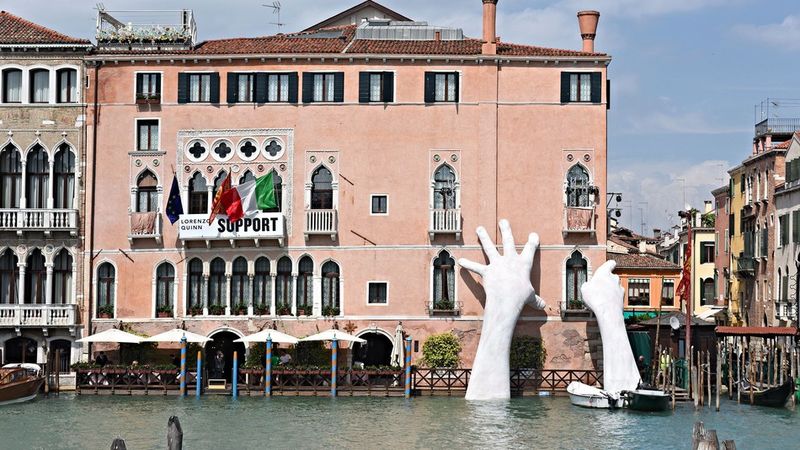 Ellen Smith — May 16, 2017 — Eco
References: mashable
Share on Facebook Share on Twitter Share on LinkedIn Share on Pinterest
Italian artist Lorenzo Quinn has erected a colossal climate change sculpture to serve as a cautionary reminder of the perils of human-caused damage and its lasting impact on the environment. Italy's beloved city, Venice finds itself sinking rampantly as global warming speeds up, now reportedly being swallowed at a rate that's 5 times faster than previously predicted.

Quinn sought to address the issue through his sculpture, 'Support,' which features two 5,000 pound hands erupting from Venice's heavily populated Grand Canal and grasping the walls of the historic Ca' Sagredo Hotel.

The climate change sculpture is a plea to action forcing the general public, scientists and social and political influences to notice and take responsibility for the devastating and irreversible effects of climate-change. Halcyon Gallery, the gallery responsible for funding the project, says optimistically "The hands symbolize tools that can both destroy the world, but also have the capacity to save it."
4.8
Score
Popularity
Activity
Freshness
View Innovation Webinars