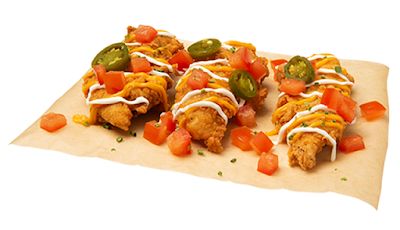 Chachos are essentially a fried chicken version of nachos. However, instead of tortilla chips, the Chachos are made with KFC's Original Recipe chicken tenders. The crispy chicken is then topped with nacho cheese sauce, sliced jalapenos, diced tomatoes, sour cream, and chives—just like traditional nachos.

KFC Canada is also offering new Chacho Fries, which feature the same toppings, but are served over French fries instead of fried chicken. In other words, it's another tex-mex take on nachos.