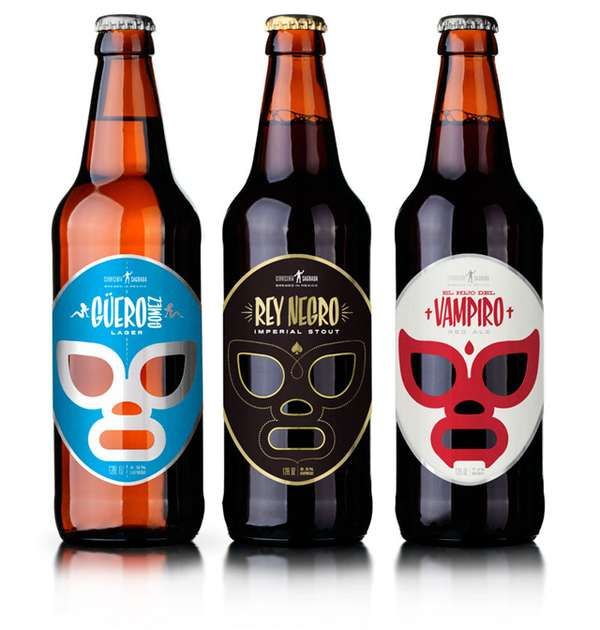 Ana Lopez — October 6, 2011 — Lifestyle
References: joseguizar & knstrct
Share on Facebook Share on Twitter Share on LinkedIn Share on Pinterest
What better way to appeal to the macho, beer-drinking crowd than to evoke the ultimate gang of Mexican banditos in beer bottles like the ones from Cerveceria Sagrada? This Mexican craft beer company dressed up its bottles in spandex masquerades and threw them into the fighting ring hoping to win some costumers.

These fierce, Tijuana warriors were adopted by designer Jose Guizar to create a product that will communicate the Mexican essence of the premium beer. The designer explains his choice, “This project was born to promote the craft of beer in Mexico and for beer lovers around the globe to relate a premium quality product with a very unique element of the country’s identity.” These pop culture idols from the 1950s give a unique personality to the brand; additionally, each beer is called according to fictional Mexican heroes: Rey Negro (Imperial Stout), Guero Gomez (Lager) and El Hijo del Vampiro (Red Ale).

The Cerveceria Sagrada found a clever way to promote both its beer and country’s history; these bottles will soon become a collector’s item.
4.1
Score
Popularity
Activity
Freshness
Get Trend Hunter Dashboard