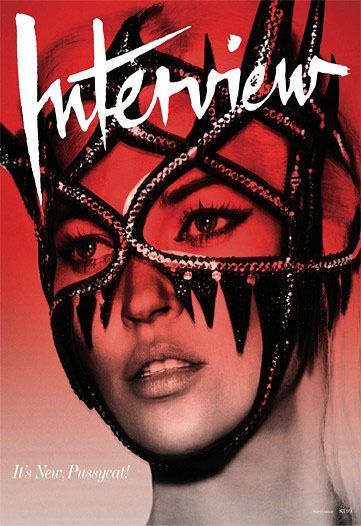 Had it not been for the recent focus on Batman in The Dark Knight movie, then the black, Swarovski-studded face mask could more aptly be described as a kinky fetish accessory.

Fortunately for Kate Moss, with rumors about Angelina Jolie starring as Cat Woman in the Dark Knight sequel, we're able to dismiss the glittering facial harness as a pop culture tribute to the recent comic character obsession.

The September 2008 issue of Interview magazine starring Cat Moss is the first cover created under the direction of new editorial director, Fabien Baron.

"Quality needs to be put into magazines today, otherwise there will be no reason for magazines to exist," Baron said.

Can't wait to see more of his work! Below are some more shots from Interview magazine before Baron's direction.
4.9
Score
Popularity
Activity
Freshness
Get the 2023 Trend Report FREE