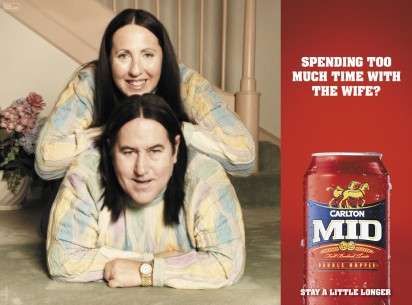 The Carlton Mid Ads Encourage Husbands to Take Time for Themselves

Meghan Young — November 28, 2011 — Marketing
References: clemengerbbdo.au & ibelieveinadv
Share on Facebook Share on Twitter Share on LinkedIn Share on Pinterest
When couples spend a lot of time together, it is natural they begin to take on each others' quips and quirks, but the Carlton Mid ad campaign warns against taking this too far. Once a boyfriend or husband begins to start looking like his girlfriend or wife, a Carlton Mid is in order.

Conceived and executed by Clemenger BBDO, an ad agency based in Melbourne, the Carlton Mid ad campaign is hilariously clever. It also shows that this agency has been keeping their eyes on some niche photoblog sites. The Carlton Mid ad campaign could easily have been part of the Awkward Family Photo site. Instead, these photos stand solo, and encourage men to take some "me" time.
2.3
Score
Popularity
Activity
Freshness
Jeremy Gutsche Keynote Speaker