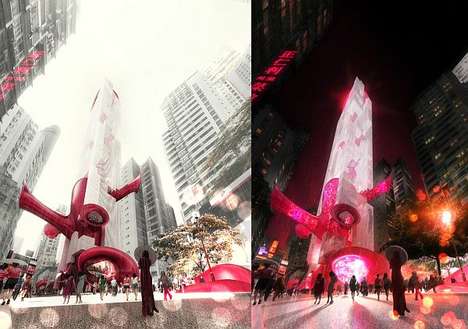 Meghan Young — March 7, 2012 — Art & Design
References: vghcompany & designbuzz
Share on Facebook Share on Twitter Share on LinkedIn Share on Pinterest
Bubble X is a night club hotel that could very well stand a name change, potentially to Blood X. It has an arterical design that is reminiscent of veins pulsing through a human body. As though a metaphor for being the pulse of Hong Kong's city life, Bubble X sports a futuristic design that would revive even the deadest streets in the world.

Conceived by vGH Company, an architectural firm based in Marseille, the Bubble X proposal won second place at the International Competition held to design a night club hotel for Hong Kong. Promising, "the existence of a carnal place where sensuality, eroticism and exhilaration prevail,” according to the designers, Bubble X is inspired by satisfied and unsatisfied fantasies and sex drives, which is represented by bodily fluids during moments of excitation.
2.8
Score
Popularity
Activity
Freshness
Attend Future Festival Virtual