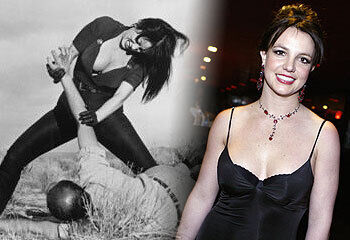 The pop star was reportedly hand-picked by the Pulp Fiction director for the role of dancer Varla, originally played by Tura Satana in the 1965 film. The movie follows three wild strippers who go on a rampage in the desert, with Spears' character killing a man with her bare hands in one bloody scene. It is reported Britney Spears will also appear in sex scenes with another girl.

Tarantino has long made it clear that he would like to cast the Toxic singer in a film, but until now, had not found a suitable enough part.

A movie insider said, "Quentin is convinced Britney will be brilliant. Britney is delighted, she thinks it could turn her career and her life around. A successful film could help her get out of her current nightmare. It is perfect Tarantino material. He wanted to get Britney first. She's playing the most important character."

Britney Spears has yet to earn praise for her acting on the big screen. She starred in the 2002 film Crossroads which earned her Razzie Awards for Worst Actress and for Worst Original Song. However, her recent acting turns in the US television series How I Met Your Mother were widely praised by critics.
3.5
Score
Popularity
Activity
Freshness
View Innovation Webinars