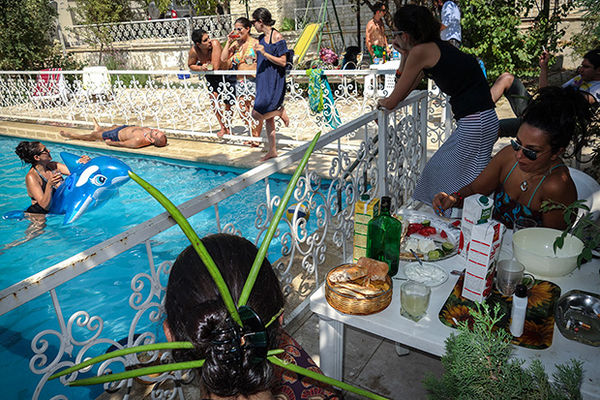 Rahul Kalvapalle — May 8, 2014 — World
References: berahman & featureshoot
Share on Facebook Share on Twitter Share on LinkedIn Share on Pinterest
These photos by London-based photographer Farhad Berahman capture Iranians indulging in various freedoms and pastimes in largely private settings. The photos, part of a series dubbed ‘Wonderland of Iran’, serve as a commentary on the private activities of Iranian urbanites under the Islamic Republic of Iran’s present-day regime.

The photos show modern-minded Iranians indulging in different activities including enjoying pool parties, partaking in painting lessons, celebrating birthdays, etc. The photos are intended to capture people’s need for freedom—even if only in private, controlled settings—in repressed environments, and suggest the development of schisms between people’s ‘ideal’ public lives and the reality of their private activities.

The photo series was inspired by Berahman’s own upbringing in a liberal Iranian family, and their implicit knowledge that their modernity was not to be revealed in certain public contexts and situations.

Polariod-Holding Villager Portraits
The 'Wakhan, An Other Afghanistan' Series is Endearing
play_circle_filled