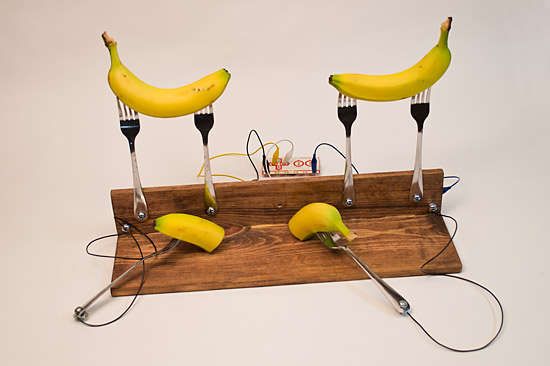 Ian Andrew Panganiban — April 15, 2013 — Tech
References: rasterweb.net & foodiggity
Share on Facebook Share on Twitter Share on LinkedIn Share on Pinterest
Fruits have been integrated into such aspects as art, clothes, musical instruments and sculptures, but rarely have they been incorporated into video games, but the MaKey MaKey Banana Pong are amazingly designed banana games that you'll just have to see to believe.

Created by Pete Prodoehl, the MaKey MaKey Banana Pong is precisely like the 2-bit video game Pong, except for the fact that a player has to use bananas as their controller. The banana-incorporated video game controllers are just as sensitive as regular bananas, so players with firm grips should probably opt out from playing this console.

This Banana Pong game is a great way of utilizing ripe bananas in the kitchen that would otherwise just be tossed out. This fruit-made video game is an interesting take to an old school gaming device.
3.7
Score
Popularity
Activity
Freshness
Get the 2023 Trend Report FREE