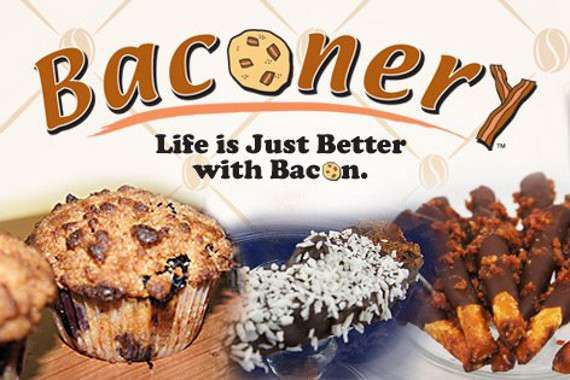 Jordy E — April 7, 2012 — Lifestyle
References: order.baconery & incrediblethings
Share on Facebook Share on Twitter Share on LinkedIn Share on Pinterest
Wesley Klein’s ‘Baconery’ bakery operates under the very theme that its name implies: bacon everything. Inspired by the marvelous salty-sweet taste produced by the merger of bacon with syrup, Klein decided to further exploit the combination, and to generously sell his unreal and atypical treats to the public.

While the merger of bacon with gourmet eats is a prominent theme within the food industry, few have mastered a pork motif where desserts are concerned. At the Baconery, which abides by the adorable slogan "Life is Just Better with Bacon," the chefs have managed to merge salty slabs of meat with cookies, chocolate, muffins and brownies. This mixture of a briny taste with a confectionery motif is no doubt pioneering a new foodie niche, and will certainly attract a great deal of attention from the adventurous taste tester.
2.7
Score
Popularity
Activity
Freshness
Get Trend Hunter Dashboard

Porky Salad Toppers
Bacon Croutons are Surprisingly Made Without Meat