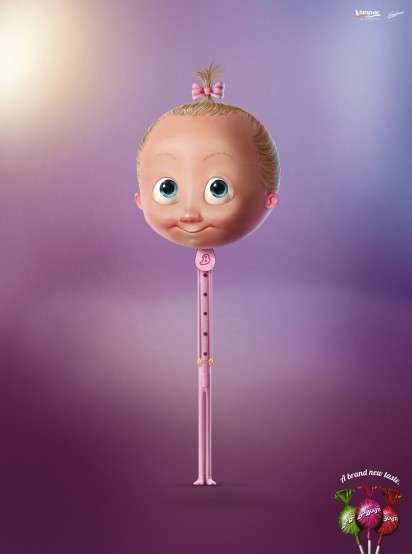 Meghan Young — November 8, 2012 — Marketing
References: ibelieveinadv
Share on Facebook Share on Twitter Share on LinkedIn Share on Pinterest
The BaBoom Lollipop campaign takes its tag lines literally. For instance, to promote "a taste that is out of this world," the image centers around an alien while "a brand new taste" is visualized by an adorable baby. Of course, the cartoonish illustrations help target the company's main demographic: children. Cute and playful, the BaBoom Lollipop campaign will appeal to a kid's creativity and imagination.

Conceived by Escala, an ad agency based in Porto Alegre, Brazil, the BaBoom Lollipop campaign was art directed by André Blanco and André Mezzomo with creative direction by Régis Montagna. Illustrated by Fescher and copy written by Maurício Cardoso, the posters are colorful and fun, just like the suckers being advertised themselves.
2.2
Score
Popularity
Activity
Freshness
Get Trend Hunter Dashboard