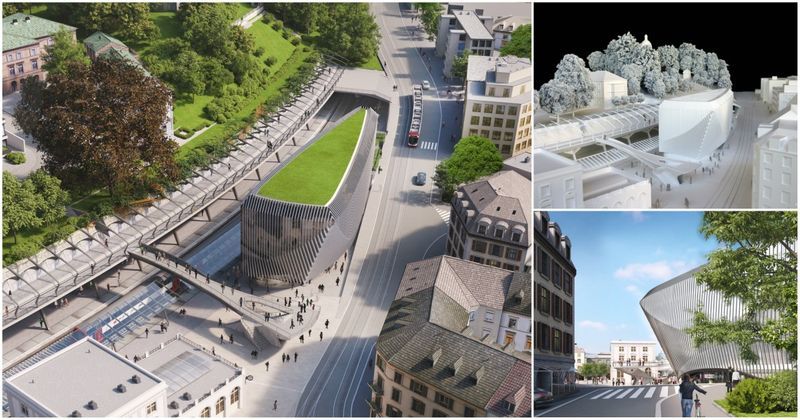 Joey Haar — September 26, 2016 — Art & Design
References: calatrava & archdaily
Share on Facebook Share on Twitter Share on LinkedIn Share on Pinterest
The AXA building, designed by Santiago Calatrava, will be incorporated into Stadelhofen Station in Zurich, Switzerland. Capped by a triangle of turf and covered in a paneled steel facade, the building will add some modern vitality to the traditional architecture that surrounds the city's core.

Stadelhofen Station is itself a modern landmark of Zurich, having also been built by Santiago Calatrava in 1990. As such, it is fitting that the AXA building, commissioned by the Swiss insurance company of the same name, should have such a striking appearance.

Beyond pure form, the AXA building is designed to handle some mass transit issues that have arisen in Zurich. 80,000 commuters travel through Stadelhofen Station each day, and many of these people commute with bicycles. To combat bicycles that create an overcrowded plaza, the AXA building will have underground bike parking for more than 1,000 riders.
3.8
Score
Popularity
Activity
Freshness
Access Advisory Services