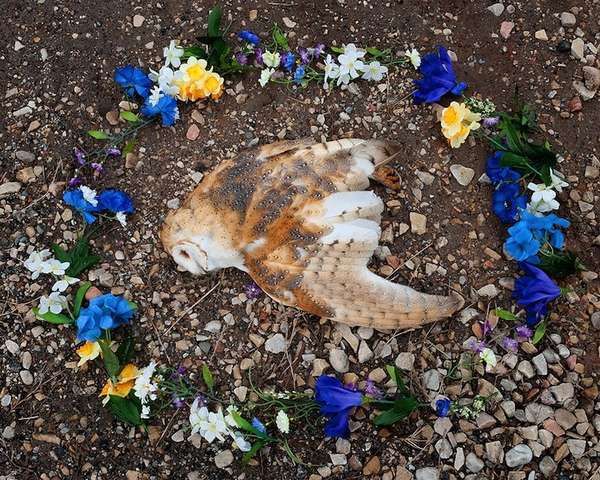 The 'At Rest' Series Features Animals Memorialized Where They Lay

Alexander Lam — July 11, 2013 — Art & Design
References: emmakisiel & mymodernmet
Share on Facebook Share on Twitter Share on LinkedIn Share on Pinterest
A collection of photos entitled 'At Rest' by photographer Emma Kisiel depicts roadkill being given a memorial. Without touching the animal carcasses left beside highways, Kisiel created beautiful memorials for the roadside victims. She then took photos of the deceased creatures to immortalize their image forever. The photo series includes beautiful and macabre shots of fallen owls, foxes, deer and other animals.

At Rest was created in order to explore how people view death and how we interact with the planet. According to Kisiel, "At Rest expresses the sacredness to the bodies of animals accidentally hit by vehicles while crossing the road." By honoring the death of these animals, the artist is personifying them to shock the viewer. Since we don't usually view the lives of animals as precious, glorifying them in this way results in an image that's both elegant and grotesque at once.
1.1
Score
Popularity
Activity
Freshness
Get the 2021 Trend Report FREE