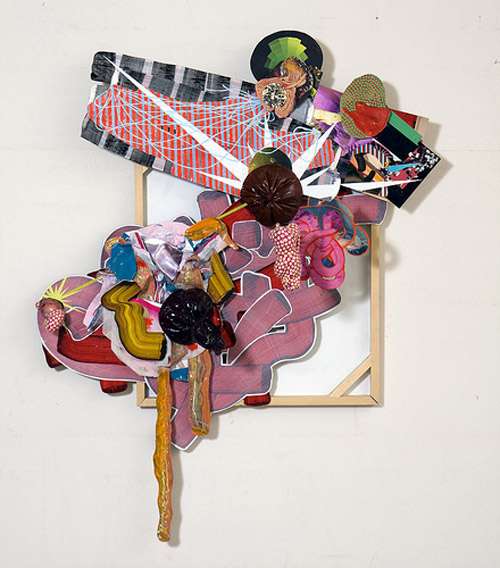 Jordan Sowunmi — August 2, 2011 — Art & Design
References: wilmurray & booooooom
Looking through artist Wil Murray's selected portfolio it's hard not to be struck by his ability to blend an alluring explosion of color, paint, and detailed intellectual insight into a series of mixed media collages that are abstract yet accessible.

A Canadian born but Berlin-based artist, Wil Murray is a graduate of the Painting program at the Alberta College of Art and Design. His unique and distinguishable aesthetic has led to his artwork being exhibited around the world, including the National Gallery of Canada, the Claremont University Gallery in Los Angeles, and the Funkhaus Nalepastrasse Gallery in Berlin, Germany.

I think as an artist, Wil Murray's strength lies in his ability to create work that is as intellectually stimulating as it is visually. His mixed media creation 'Headful of Pidgin, Heart Full of Creole' which is the lead image of this post is described as a piece that, "Divulges a relationship of spoken language to the visual language explored in this exhibition. Pidgin as a functional language developed from the amalgamation of separate languages where as Creole is an all-new language developed from a mixture of various others."

With work as intricate as that, Wil Murray is an artist with a committment to detail, and that will serve him well in his career. Up next for the Canadian expat: A solo exhibit at Staatsgalerie Prenzlauer Berg in his adopted hometown of Berlin.
2.1
Score
Popularity
Activity
Freshness