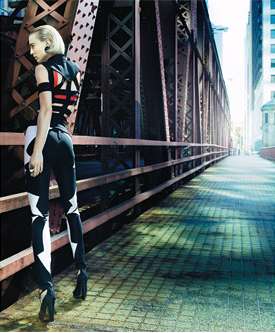 Bianca — April 2, 2009 — Fashion
References: nytimes
Share on Facebook Share on Twitter Share on LinkedIn Share on Pinterest
You may not consider Illinois a stylish state, but after looking at this editorial, it’s undeniable it serves as a beautiful background to showcase today’s most cutting edge fashions. It might also become your next shopping destination according to The New York Times feature piece titled Chicago: City of Angles.

“Since 1871, when it rose spectacularly after the Great Fire, Chicago has been famous for pioneering architecture — from the steel-frame skyscraper to the flat geometry of the Prairie School to Mies van der Rohe’s clean Minimalism,” the New York Times says. “When it comes to cutting-edge fashion, though, the city rarely registered. Lost between the glamorous coasts, it’s been a no-style zone. Until now.”