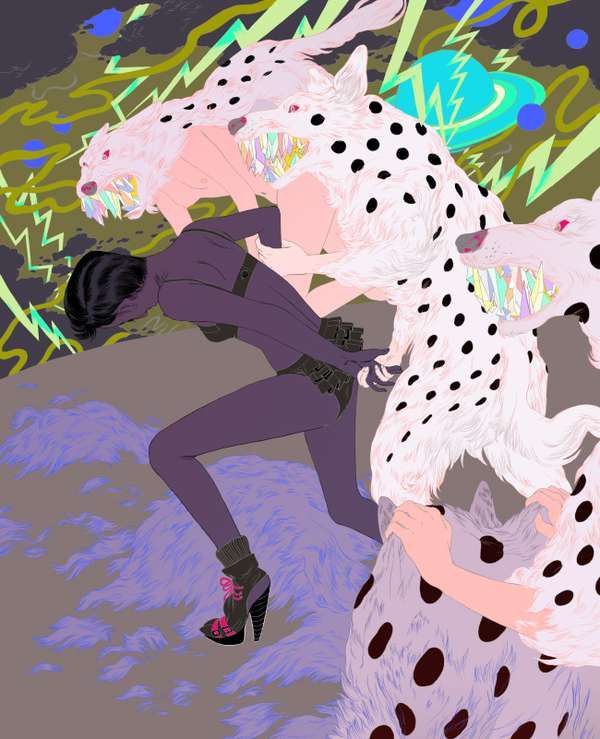 Angie Wang Captures Excitement and Danger in Her Illustrations

Jordan Sowunmi — May 27, 2011 — Pop Culture
References: okchickadee & booooooom
Share on Facebook Share on Twitter Share on LinkedIn Share on Pinterest
Portland-based illustrator Angie Wang knew she was cut out for a career in the art world when she made a snot mural as a kid. More than a decade later, and her out of the box artistic sensibilities remain firmly intact.

Angie Wang specializes in taking advantage of incredible effervescent colors and making them pop in illustrations that often feature fantastical, absurdist imagery. Some of my favorite highlights from her body of work include a woman frantically fighting the clutches of a pack of polka dot-covered wolves and another which features a woman named Annie using a baseball bat to have a physical battle with the sun.

Angie Wang's illustrations do not only deal with the fictional and fantastical. She also has pop culture illustrations featuring R&B firebrand Janelle Monae, as well as pop superstar Lady GaGa. Her work has been recognized by some major players in the newspaper and magazine industry, including: the New Yorker, the New York Times and Nylon Magazine.

With only three years in the game, Angie Wang has already established herself as an artist with a bright future.
5.7
Score
Popularity
Activity
Freshness
Access Advisory Services