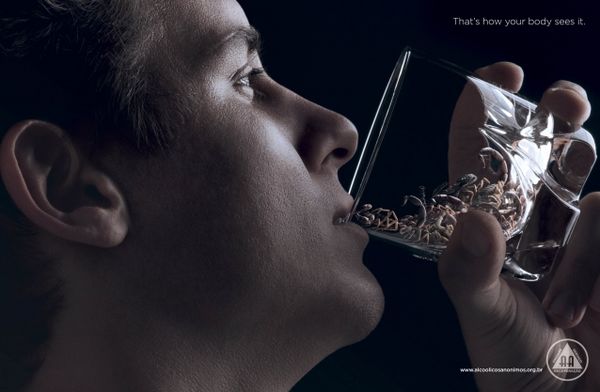 Meghan Young — January 31, 2014 — Lifestyle
References: adeevee
Share on Facebook Share on Twitter Share on LinkedIn Share on Pinterest
The Alcoholic Anonymous Brazil ad campaign focuses on shudder-inducing images that would inspire many people to put down their glass of wine or liquor immediately. Or perhaps people will down them for some liquid courage. Considering the message being promoted, the mostly likely action is the former.

Conceived and executed by Dois, an ad agency based in Brasília, Brasil, the Alcoholic Anonymous Brazil ad campaign reads, "That's how your body sees it." According to the print ads, "your body" sees alcoholic beverages as poisonous arthropods such as scorpions and spiders. Creative and art directed by Gustavo Dois with copy writing by Fábio Ludwig, the dark and disturbing images were shot by photographer Studio Nuts. Overall, it will get people to think twice about their drink of choice.
2.6
Score
Popularity
Activity
Freshness
Get the 2021 Trend Report FREE