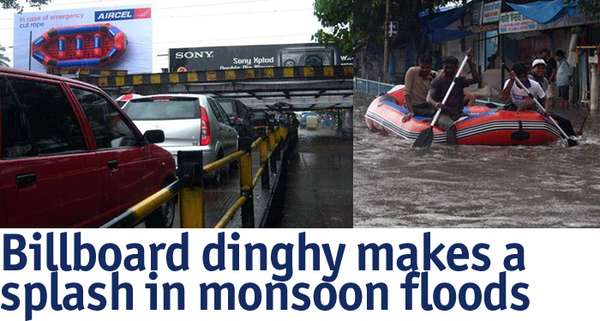 Bianca — August 6, 2009 — Marketing
References: aircel & springwise
Share on Facebook Share on Twitter Share on LinkedIn Share on Pinterest
This Aircel billboard literally helped save people from disaster! When the monsoon rains hit in Mumbai, a group of fast-thinkers grabbed hold of the dinghy mounted on the Aircel billboard. The text on the billboard read, “In case of emergency, cut rope,” which is exactly what they did.

It was no coincidence that the little boat was there at the perfect time. Outdoor agency Primesite was thinking ahead, setting up the perfect publicity stunt based on corporate social responsibility.

“The result? Near constant local media attention for Aircel, even including the headline, ‘Aircel did what [government agency] BMC did not,’” according to Springwise. “Reportedly, Aircel now plans to implement something similar in Delhi and Kolkata as well.”

TrendWatching refers to this new wave of corporate generosity as “Generation G.” Keep an eye out for this movement, it’s bound to get even more innovative!
3.9
Score
Popularity
Activity
Freshness
Get Trend Hunter Dashboard