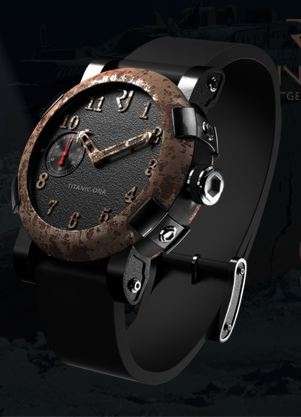 Romain Jerome Creates Watches From Pieces of the Titanic

jagedge26 — April 13, 2007 — Luxury
References: romainjerome.ch & cnn
Ever wanted to own a piece of history? Well, now's your chance, providing you "sink" enough money into the venture. Just when we thought we thought the whole Titanic craze had finally died down (saving us from further repeated listening to that awful Celine Dion song), upstart watch-maker Romain Jerome has decided to unveil a line of watches that contain elements recovered from the the hull of the famous wreck. Several of the nine models in the debut collection are forged with steel from the Titanic's hull, and most models in the ultra high-end collection also include dials painted with coal from the luxury-liner, which sank in 1912. Romain Jerome has gone even further than most manufacturers might by artificially rusting the cases of several models to give them an aged look. Prices for the limited edition pieces will range from $7,800 to well over $150,000.
4.7
Score
Popularity
Activity
Freshness