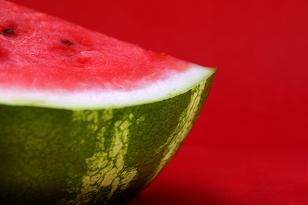 Pearl — June 12, 2008 — Luxury
References: latimesblogs.latimes
Share on Facebook Share on Twitter Share on LinkedIn Share on Pinterest
Would you pay $6,100 for just one watermelon? At 17 lbs, that works out to almost $360 per lb! Well, somebody recently did in Japan. He bid and won a rare, black Densuke watermelon at an auction. According to the Associated Press (AP), this is the most expensive watermelon ever sold in Japan and is possibly a world record breaker too. Densuke watermelons are usually pricey but in the $188- $283 range.

Densuke watermelon are rare because they are only grown on the northern island of Hokkaido. The black melon was the best of the crop. According to a Japanese spokesman for the Tohma Agricultural Cooperative, what made this one special was the unusual black skin and unparalleled taste. He was quoted by AP, "It's a watermelon, but it's not the same." We will have to take his word for it.
5.4
Score
Popularity
Activity
Freshness
Get Trend Hunter Dashboard