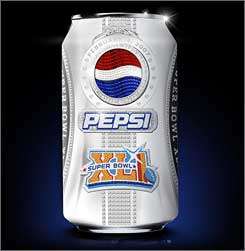 Jeremy Gutsche — January 12, 2007 — Marketing
References: usatoday
Share on Facebook Share on Twitter Share on LinkedIn Share on Pinterest
Looking to add a little luxury to your Pepsi? Now you can with a $100,000 jewel studded Pepsi can. The only dealio is that you have to win it. The can is trimmed with 300 diamonds, 100 saphires and 100 rubies. Oh... And it's ugly.

This trend of luxutizing products for press is something we've covered before. In fact, I think it's now overplayed.

â€¢ Philips Electronics (PHG) unveiled a diamond-decorated LCD TV on Sunday at the Consumer Electronics Show in Las Vegas. The Ambilight FlatTV trimmed with about 2,250 diamonds will be showcased at Philips events, then auctioned for charity.

â€¢ Victoria's Secret (LTD) annually creates for sale a jeweled bra â€” this year, a $6.5 million diamond-studded Victoria's Secret Hearts on Fire model. The lingerie company hasn't actually sold any of the multimillion-dollar bras, but gets plenty of publicity by featuring them in its holiday catalog and at fashion shows.

"Its not that companies necessarily expect many people to buy these products," says McMennamin. "It's similar to having a flagship store on Fifth Avenue or SoHo, where they don't expect the cash register to ring as much as a regular store" but use it to build cachet, instead.

â€¢ When Motorola (MOT) and Baby Phat said they would sell a limited-edition $700 diamond-accented "Baby Phat by Kimora Lee Simmons" cellphone in October 2004, it brought headlines about "ring bling."