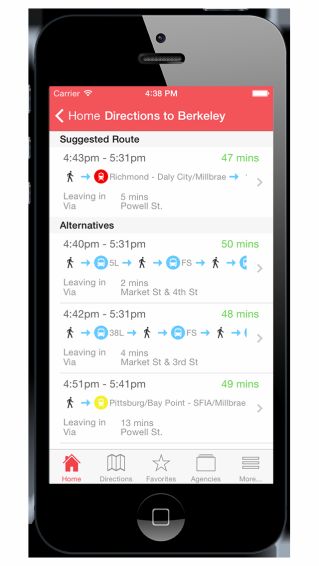 Jennifer Paul — April 15, 2014 — Tech
References: zoute.me & techcrunch
Share on Facebook Share on Twitter Share on LinkedIn Share on Pinterest
Zoute is a transit app that takes real-time departures and fixed route schedules to ensure you are getting the best directions. The app is now available for iPhone. The app was originally launched for Android users that live in the Bay Area. It has now expanded to New York, Boston, Chicago, L.A., D.C., Philadelphia and Portland.

The app comes from mobile developers Hai Le and Li Li. They noticed that a lot of the transit applications were built for a singly city or single transit agency. They wanted to build something that people could use regardless of their destination. It aims to be more comprehensive by offering real-time departure information along with fixed schedules.

To make the decision easier on where to take Zoute next, they have launched a "Bring Zoute to my city" feature within the app. They are hoping to focus more on areas where people are requesting transit applications.
2.6
Score
Popularity
Activity
Freshness
Get Trend Hunter Dashboard