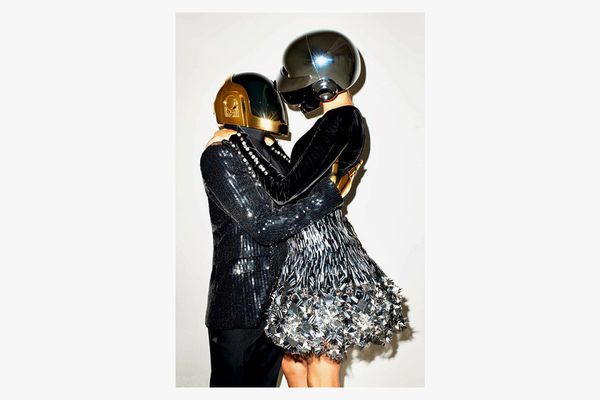 Meghan Young — November 7, 2013 — Fashion
References: online.wsj & fashiongonerogue
Share on Facebook Share on Twitter Share on LinkedIn Share on Pinterest
It seems as though the men behind the masks of the insanely popular French electronic music duo have met their match in the WSJ Magazine November 2013. Starring alongside supermodel Gisele Bundchen, they are one big happy family. That is, until jealousy ensues. From knockouts to quieter moments as well as a glimpse into the future, the photoshoot is full of drama.

Shot in the vein of famed photographer Terry Richardson, the WSJ Magazine November 2013 editorial is captured against a plain white backdrop. Although this might be his signature style, it really lets the sequinned blazers and gleaming helmets to stand out even more. Styled by George Cortina, the looks are certainly a glamorous upgrade from the tailored suits they wore in their recent Vogue photoshoot. It's perfectly festive.
1
Score
Popularity
Activity
Freshness
Get Trend Hunter Dashboard