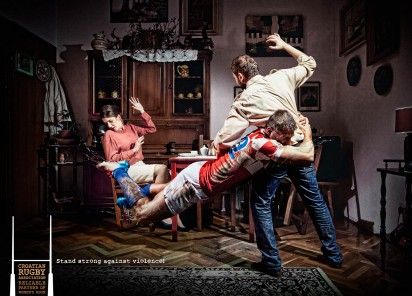 Meghan Young — November 29, 2013 — Social Good
References: ibelieveinadv
Although the Woman’s Room ad campaign might seem to be promoting violence against violence, once the uniform on one of the males is recognized, it becomes clear that is not the case at all. Instead, it simply shows a classic Rugby move that tackles the aggressor to the ground before he can do any real harm. This image shows the Croatian rugby association's involvement with the Woman’s Room non profit organization.

Conceived and executed by IMAGO, an ad agency based in Zagreb, Croatia, the Woman’s Room ad campaign urges people to 'stand strong against violence.' The Croatian rugby association does so by donating money from ticket sale. They have been doing so since August 2013. Others can easily follow suit.
4.7
Score
Popularity
Activity
Freshness