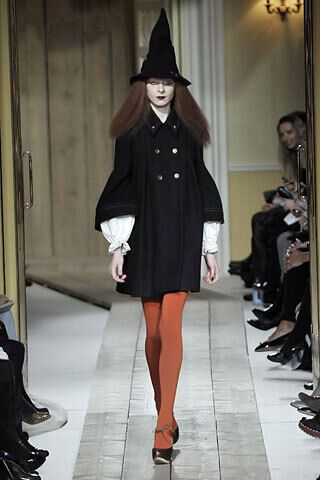 Bianca — February 15, 2008 — Unique
References: style
Share on Facebook Share on Twitter Share on LinkedIn Share on Pinterest
Halloween is a big part of autumn for many people, but has the marketing become so influential on our society that a designer can design a ready to wear collection inspired by it? Luella marched model Alice Gibb down the runway dressed as a witch, complete with pointed hat and pumpkin orange tights at the Fall 2008 show at London Fashion Week.

The rest of the show wasn't as ghoulish or extreme, but Luella's line continued to look as if it were inspired by October 31. Most of the models had frizzy hair and white complexions and some even had black lipstick.

Model Masha Tyelna sashayed down the catwalk looking like a possessed school girl, almost like an evil Sailor Moon with high pigtails and cascading black ribbons, her eyes icy cold as she made walked mechanically in her picnic tablecloth dress.

A third model, Daiane Conterato, not only had a wildly teased and crimped mane, but her hair looked as though it had been spray painted to look gray!

Two accessory that continued to repeat themselves were a knit cap with an awkwardly tall point on top, like a rhinoceros, and a leather rucksack that looked like something a German school child would have carried several decades ago.
4
Score
Popularity
Activity
Freshness
Attend Future Festival