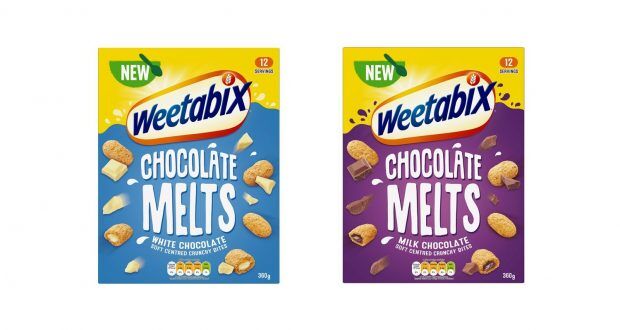 Michael Hemsworth — March 22, 2021 — Marketing
References: weetabix & talkingretail
Share on Facebook Share on Twitter Share on LinkedIn Share on Pinterest
The new Weetabix Melts cereal has been announced by the brand in the UK to satisfy demand for breakfast food varieties that are both flavorful and nutritious. The cereal comes in two flavor options including Milk and White Chocolate, which are both high in fiber, fortified with several vitamins and iron, and also low in salt. The product will be launched through a year-long advertising campaign that will include TV commercials, social media and influencer campaigns and more.

Head of Brand at the Weetabix Food Company Gareth Turner spoke on the new Weetabix Melts cereal saying, "Taste is without a doubt the number one driver of purchase within cereals. Weetabix Melts allow us to appeal to shoppers looking for a more indulgent option at breakfast or for a snack, with the added reassurance of health and quality that consumers know and expect from the Weetabix brand. As Melts are classified as non-HFSS, we intend to support the launch with a significant through-the-line campaign, driving footfall and bringing much wanted excitement to the cereal aisle. We’re sure that shoppers will love Weetabix Melts – in fact, it has been our best-ever performing product concept within consumer research panels. A significant eight out of 10 of those asked stated that they would definitely purchase, with taste and appeal scores higher than our competitors in the sector.”
4.2
Score
Popularity
Activity
Freshness
Attend Future Festival