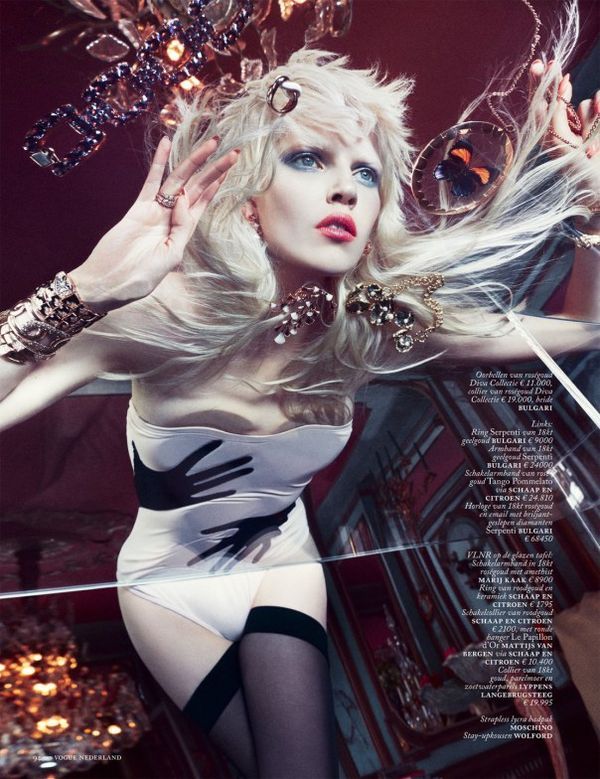 Vasiliki Marapas — February 17, 2014 — Fashion
References: vogue.nl & wearesodroee
Share on Facebook Share on Twitter Share on LinkedIn Share on Pinterest
The 'Fantastic Jewels' editorial for the Vogue Netherlands March 2014 stars Ola Rudnicka, dripping head to toe in fantastic jewels. Boe Marion photographed the fair-haired beauty as she writhed around in over-sized baubles, gem-studded clothing and outrageous accessories, including a bedazzled eye patch. Rudnicka even took things to the next level, daring to be photographed with a lucky crustacean in one shot.

While Rudnicka does take it to the extremes in this editorial, which was styled by Marije Goekoop, it's hard not to swoon at all of her bling. Her jewels were further accented by vibrant makeup looks provided by Ignacio Alonso, while her choppy platinum 'do was styled by Ali Pirzadeh.

The end result was a spread that dares to push the envelope when it comes to constructing out-there looks.
5.9
Score
Popularity
Activity
Freshness
Jeremy Gutsche Keynote Speaker