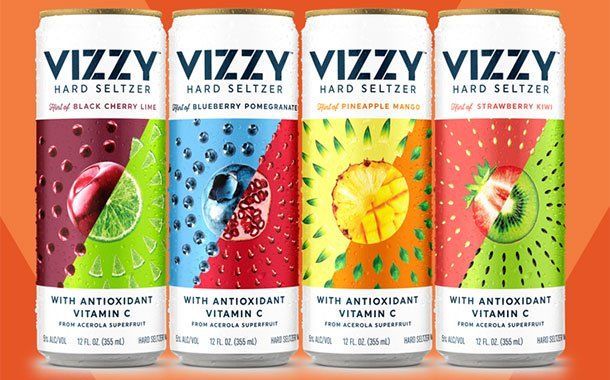 The Vizzy Hard Seltzer will Come in Four Flavor Options

Michael Hemsworth — February 28, 2020 — Marketing
References: molsoncoors & foodbev
Share on Facebook Share on Twitter Share on LinkedIn Share on Pinterest
Flavor and function are colliding with the announcement of the new Vizzy Hard Seltzer drinks from Molson Coors that will offer consumers a premium product that's tasty yet beneficial. The drink range has four flavors in total including Black Cherry Lime, Pineapple Mango, Strawberry Kiwi and Blueberry Pomegranate, which are all roughly 100 calories, have a 5% ABV and contain just one gram of sugar.

The drinks are also infused with the superfruit acerola, which increases the antioxidant properties of the libations as well as the vitamin C content. The canned beverages are being launched alongside an additional product called Coors Seltzer to double down on the increasing popularity of seltzer-based drinks.

North American Vice President of Innovation for Molson Coors Sofia Colucci spoke on the Vizzy Hard Seltzer drinks saying, "We believe that as the hard seltzer segment continues to grow, consumers will become even more demanding about what’s in their drinks. We’re trying to give consumers what they want. Vizzy is still our big national bet in hard seltzers, but there’s no doubt we’ll push on Coors Seltzer given the strength of the proposition and the scale of Coors. But we are being smart about this. We’re coming at this market with distinct propositions.”
4.9
Score
Popularity
Activity
Freshness
Get the 2023 Trend Report FREE