Katie Harris, Co-Founder and Design Director of The Amazings (INTERVIEW)
Next
Set of
Related
Ideas 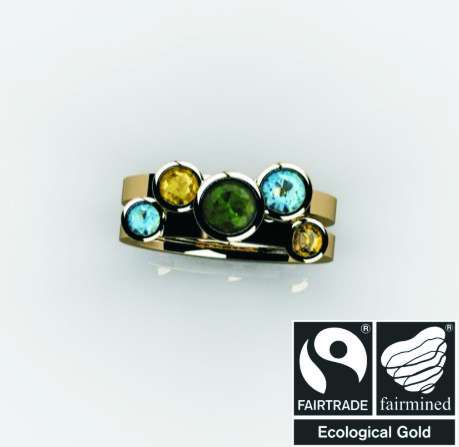 She discusses everything from the nitty-gritty realities of the mining industry to the difficulties of balancing her creative side with running a business.

I saw the horror of what mining for precious metals can do to a community when mis-managed; even to the extent of financing civil wars in Sierra Leone, for example, in the 1990s when profits of "blood diamonds" were used for weapons and arms to commit atrocities. It made me think, "What if we flipped that?" and used profits as a development tool to benefit producer countries. Remarkably, many of the most mineral rich countries remain in the most severe poverty. The miners certainly aren't seeing any profit for one of the most dangerous forms of labor and extracting one of the most valuable resources. So that was it -- "What if?" -- and I piloted Fifi Bijoux as an ethical business model.

In 2006, I was Head of Design for a commercial jewelry brand and I was asked to source new suppliers in Asia. I noticed a real issue with variable quality in the deliveries and started asking more questions about our manufacturers suppliers of gems etc., in order to improve the standards and calibrate the gem grades. It was impossible. Trying to trace back to the gem polisher was hard enough -- and learning about the extent of child labor and exploitative practises which were rife. I wanted to know which countries they were mined from -- that information just wasn't accessible. I thought it was crazy -- at a time when cheap fashion labels were being so publically called to account over their supply chains- that a luxury industry was oblivious to the harm and threat to brand integrity from high-risk trading.

It became apparent that this was rife throughout the industry, not something that retailers were even aware of far less able to address. It was the whole supply chain that was problematic. So I decided to turn it on its head: source from the ground up and make sure that each player was benefiting from equitable trade and from ethical standards including health and safety, no child labor, ecological methods of extractions and land rehabilitation where required.

I've always worked on the premise that the jewelry industry has a huge opportunity to make a positive contribution to mining communities. I maintain that and I hope that Fifi Bijoux has gone some way to demonstrate that this is possible and show that the market appreciates true luxury value -- knowing the provenance of the goods they buy and knowing that they can be proud of their jewelry.

I travel a lot, so I take a notebook and a camera. Since art school, I've kept a scrap book of notes, ideas, scribbles and sketches. Sometimes I'll over hear a phrase that sums up the mood of the moment, or sometimes I'll see a burst of color and know that I want to use that palette. Every 6 months or so, I pull together the scraps and notes and images and see what story they make. I'll make a mood board and refer to it throughout the design process.

It's quite a challenge to be creative when you're trying to run a business at the same time -- I find the two things are not complementary. I have to be able to be in the moment but also feel charged when I'm designing and phone calls and interruptions annoy me at that time! Of course, that’s kind of tough because you still have to be available and give others your full attention. I am quite disciplined about designing, though, I cant just wait for the mood to strike me or wait til its quiet -- so I need to make space. Usually, weekends are best; airports and hotel rooms also work quite well! I never struggle to be visually creative (to come up with designs) but sometimes I struggle to make decisions on which ones are worthwhile pursuing. I have to leave it when I'm not 100% sure. The next day I'll go in with fresh eyes and fire out the wheat from the chaff in about 10 seconds -- I'm pretty ruthless but I need to have a different head on from the creative one for that job!
5.6
Score
Popularity
Activity
Freshness
View Innovation Webinars