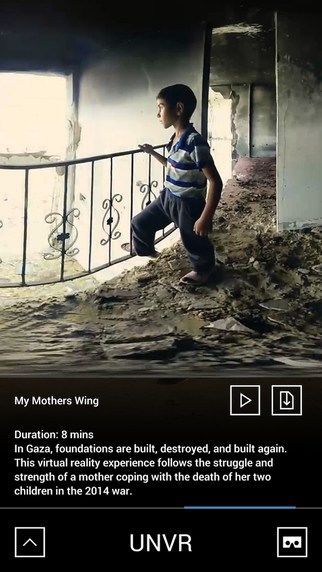 Joey Haar — September 21, 2016 — Social Good
References: unitednationsvirtualreality.wordpress & theverge
Share on Facebook Share on Twitter Share on LinkedIn Share on Pinterest
The United Nations' UNVR app is a clever way to use technology in order to increase people's empathy. Because VR is so immersive, it can make people feel as though they have been physically transported across the planet. The UNVR app takes this principle of transportation and makes it emotional rather than physical, encouraging those who use it to feel for -- and make donations to -- the causes depicted.

The UNVR app is comprised of four VR experiences. The first, 'Clouds over Sidra,' follows a 12-year-old Syrian refugee. A UNICEF study showed that it doubled the likelihood of a donation for those who watched it compared to those who didn't.

In light of this success, the UN produced three new VR experiences: 'My Mother's Wings,' about Gaza, 'Waves of Grace,' about Liberia and 'Beyond the Lake,' about the Democratic Republic of the Congo.
1.2
Score
Popularity
Activity
Freshness
Get Better and Faster