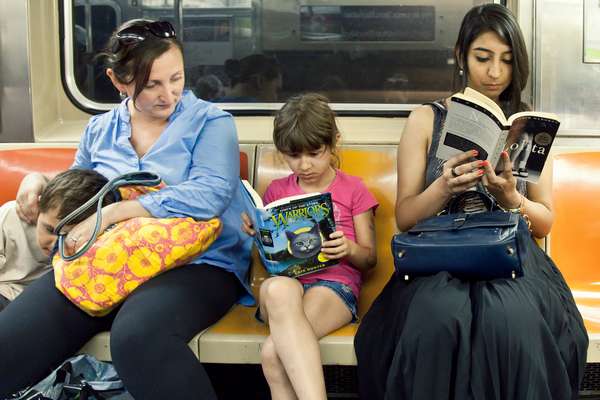 Romina S. Cortellucci — July 16, 2012 — World
References: undergroundnewyorkpubliclibrary & swiss-miss
Share on Facebook Share on Twitter Share on LinkedIn Share on Pinterest
As New York City subway riders commute their way through the five boroughs, the Underground New York Public Library captures them mid-read. The photography project is found on the Underground New York Public Library Tumblr site and visually catalogs 'Reading-Riders' as they are photographed enthralled in their reading, whether it be paperback, graphic novel or e-book. Started and curated by photographer and storyteller Ourit Ben-Haim by capturing readers, the library indicates on its site that it, "freely lends out a reminder that we’re capable of traveling to great depths within ourselves and as a whole."

The photographs are part voyeuristic and part captivating with each book reflecting the reader and the entire project being a microcosm for escapism through travel as whole. Each of the photos is captioned by the name of the book the subway rider is reading. And, with hundreds of photos, the site is increasing popularity has spawned a helpful fan base that contributes to deciphering the unknown books in some of the photographs.
2.3
Score
Popularity
Activity
Freshness
Get Better and Faster