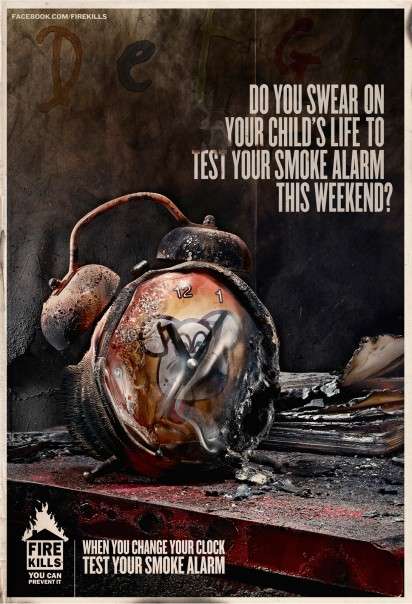 Meghan Young — October 29, 2012 — Marketing
References: facebook & ibelieveinadv
Share on Facebook Share on Twitter Share on LinkedIn Share on Pinterest
Some may dismiss the UK Government Fire Kills ad campaign because it appears to simply state the obvious. Nevertheless, there is an underlying message that is even more important than the 'fire kills' one. The powerful imagery of burning clocks and watches alludes to it while the tag lines poses an important request, "When you change your clocks, check your smoke alarms."

The UK Government Fire Kills ad campaign was conceived and executed by RKCR/Y&R, an ad agency based in London, United Kingdom. Creative directed by Mike Boles and Jerry Hollens with photography by Giles Revell, it helps to encourage a simple annual routine to ensure the safety of everyone living in the house. Since it is a simple and easy task to do, there should be no excuse not to do it.
3.9
Score
Popularity
Activity
Freshness
Attend Future Festival