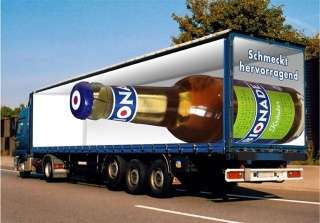 Bianca — January 16, 2008 — Marketing
References: ispycool
Share on Facebook Share on Twitter Share on LinkedIn Share on Pinterest
We see trucks with advertisements on them all the time, but most don’t get a second look. These trucks, however, are so clever; they create illusions that force the eye to look back at least once more. Trucks are essentially mobile billboards, and by creating campaigns that draw attention, truckvertising can be a very successful way to catch visual attention and create buzz as people share their appreciation of the creativity.

Featured in the gallery is a truck with an ad for Bionade, an organic, non-alcoholic, carbonated German drink. The enormous Bionade bottle appears to be laying inside a box; the illusion is three dimensional. The next truck looks like a huge aquarium, and the one following looks like a home library complete with Post-it notes and cork board for messages.
6
Score
Popularity
Activity
Freshness
Get Trend Hunter Dashboard