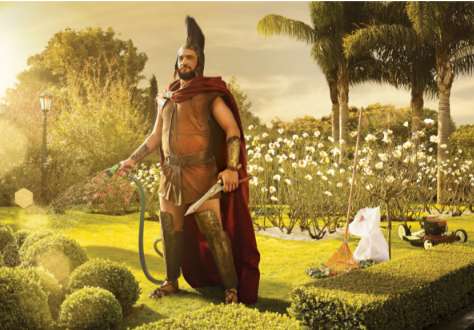 Amelia Roblin — September 8, 2011 — Autos
References: saatchi & adsoftheworld
Share on Facebook Share on Twitter Share on LinkedIn Share on Pinterest
If you overlooked the logo in the corner of these Toyota Tacoma campaign prints, would you guess that they're meant to sell cars? Most likely not, because there isn't a single vehicle present, nor any reference to driving at all.

What the Badillo Nazca Saatchi & Saatchi advertising agency does offer are two pictures of very manly men carrying on mundane, albeit convincingly masculine, tasks. One is at work on a construction site, while the second engages in his gardening at home. The first costumed character is a viking, fitting well into a greyscale scene of concrete and dirt, where the latter is dressed as a Spartan, watering his Italian landscaped property in full gladiator garb.

But the Toyota Tacoma campaign is selling trucks of course, so where the company's message comes together is in its statement of "1,350 lbs of load capacity.
Make you feel powerful."
4.2
Score
Popularity
Activity
Freshness
Jeremy Gutsche Keynote Speaker