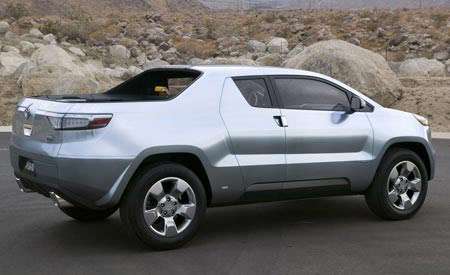 The hybrid A-BAT mobile follows in the footsteps of Chevrolet's Silverado hybrid, the world's first hybrid pick up truck which we saw revealed at the Los Angeles Auto Show.

Toyota's compact pickup will add some sleek diversity to the market. It's unique design includes 19 inch wheels and "suicide doors" that open like a box, just like on Toyota's FJ Cruiser. The futuristic design includes a 4-cylinder gas engine compatible with Toyota's Hybrid Synergy Drive, allowing it to run on gas and electricity for cleaner fuel efficiency.

"The goal of Toyota's design team was to come up with a vehicle that offered good fuel economy and a unique look, as well as durability and maneuverability," News.com wrote.